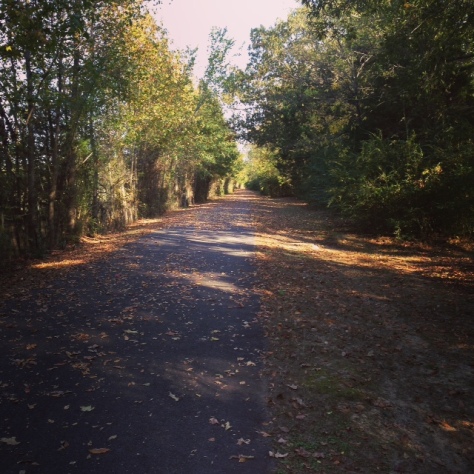 Saturday was tough. I had a lot to do and my brain was short-circuiting at every turn. If you read The Saturday Morning Struggle, then you know the backstory. That night, I ended up staying up until 11 p.m. finishing a novel I had been reading. To be completely forthcoming, I was reading a novel, munching on Cheetos, and savoring lollipops.

It must have been exactly what I needed, because I woke up refreshed and in a much better frame of mind. Even though we both stayed up later than usual, May Lee and I still made it to early service at church and got to spend the morning with our family, including a lunch of delicious Mexican food.

After a stop at Kroger for groceries, we came home and unloaded the car. I’ve been trying to be more intentional about requiring May Lee to help with things like putting away groceries and such. She was actually a big help today while we were at the store and then again when we were putting things away. She is growing up so fast!

Once everything was put up, I promptly reclined on the couch to close my eyes “for a minute” and opened them again an hour later. I was a little foggy when I woke up and struggled to accept that an entire hour had passed. Once I shook the cobwebs off, May Lee and I watered our flowers and got ready to carve the jack-o-lantern. 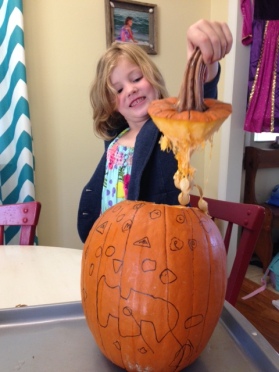 May Lee drew the design on the pumpkin with a sharpie, and I carved to her specifications. We even decided to separate the seeds and later roasted them. We tried to do the seeds in cinnamon and sugar as suggested by Food Network, but after tasting them, we decided that we weren’t fans. This was surprising, since we both love pumpkin seeds. Apparently, we need to leave the roasting process to the experts.

After that, I went for my long run while May Lee played at a neighbor’s house. The run itself was really terrible. A belly full of taquitos and chips and salsa is not ideal fuel for running. My hands were rather swollen by the end of the run, not to mention that I was also terribly thirsty. I ended up having to walk a few steps a couple of times and shake out my legs, but I kept going until I had run a total of 2.5 miles. It was my slowest mile time yet.

Despite all of those challenges, I really enjoyed being out there. As I was walking to warm up, I watched a deer cross the road ahead of me and gracefully bound over a fence. When I started to run, I came to a curve in the path where a man was petting a beautiful paint horse. A pony was also at the gate, waiting for his or her turn for attention. Many families were out enjoying the day, and that just made it a pleasant atmosphere to be in. It also provided motivation to keep going when all I was feeling was the pain of this run!

I guess the moral of this story is that God hears our cries and provides rest when we need it. It may not come in the form we fantasize about when we are in the thick of it and looking for an escape. But rest does come, and you know, today was a lot more enjoyable than hiding out at the Holiday Inn with snacks and Netflix. Isn’t that just like God to deliver beyond our expectations? I really love that about Him.